What Makes 40s Vintage So Popular?

40s vintage items are some of the most sought-after garments on the market. We asked members of the Facebook group devoted to the authentic 40s style: what makes this time period so special?
Liisa Jokinen · Jun 15, 2021Cover photo: Olivia Bullock
40s vintage

What Makes 40s Vintage So Popular?

40s vintage items are some of the most sought-after garments on the market. We asked members of the Facebook group devoted to the authentic 40s style: what makes this time period so special?
Liisa Jokinen · Jun 15, 2021Cover photo: Olivia Bullock

Facebook group Authentic 1940’s Women’s Fashion And Beauty Forum is for women who wear and admire authentic 40s women’s fashion. The 7,700 members share their tips and knowledge on how to achieve that authentic 40s vibe. We asked the members how did they discover the 40s style and what makes it so fascinating to them.

“I got hooked on the styles and the sounds of the 40s when I was just a kid. I think I was about 9. I still remember the first time I noticed swing music. I told my dad ‘Dad there’s this music that I heard and I think it’s called jazz!!!’ and he tried to play me Dave Brubeck and I was like ‘no no that’s not it’. He kept going till he found Tommy Dorsey and I was like ‘THAT!’”, remembers Kellin Pletcher. Nancy Llano was 11 or 12 years old when she discovered 40s music.

“Every year on Saturday after Thanksgiving my hometown had a dance called Home for the Holidays, a WW2 themed dance with a big band orchestra and performers with period dress encouraged. My parents had gone for years and when I was 11 or 12 I was allowed to go. I think that was the year I discovered Billie Holiday and Louis Armstrong. I was hooked. The music, the fashion, the dancing.” 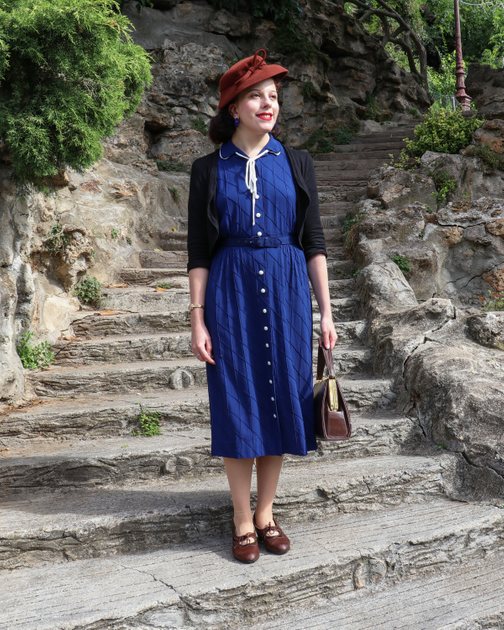 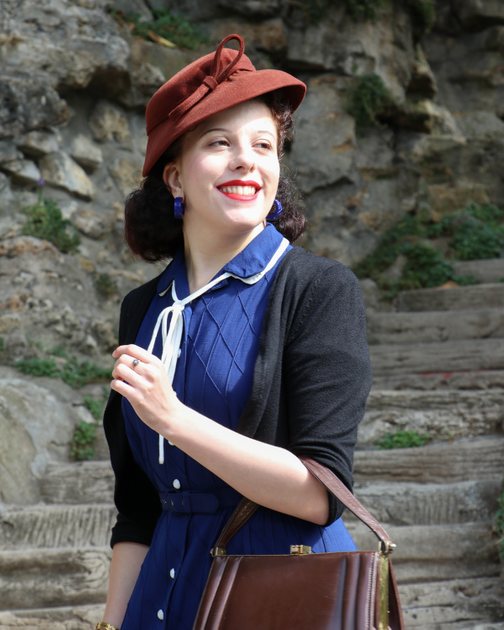 “I have been passionate about the 40s since I was 12 years old and when I was about 17, I began to dress in the 40s style, too. I like the elegance and simplicity of the decade. People of that decade did care of their way of dressing and being in society, they do not go out in pyjamas!” 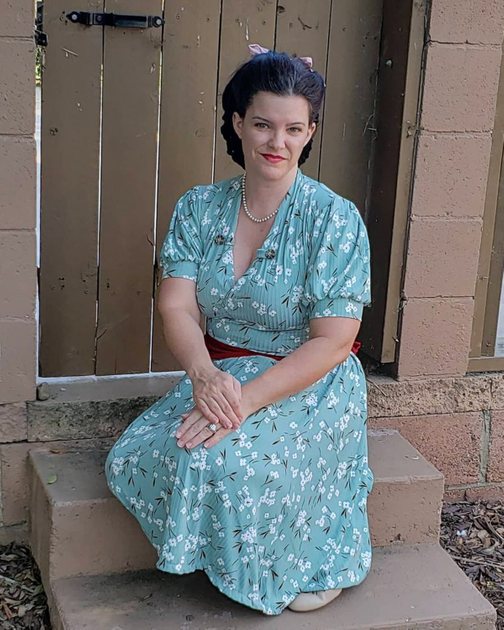 “I fell in love with the 40s in my 20s. I took a history of jazz class in college which sent me down this path of researching the musicians, clothing, and the way of life”, says Rebecca Stowers, a sewist and mother of three from California.

“I also love the romance of the 40s: the way men and women not only met and fell in love but the way the world came together in WW2.” 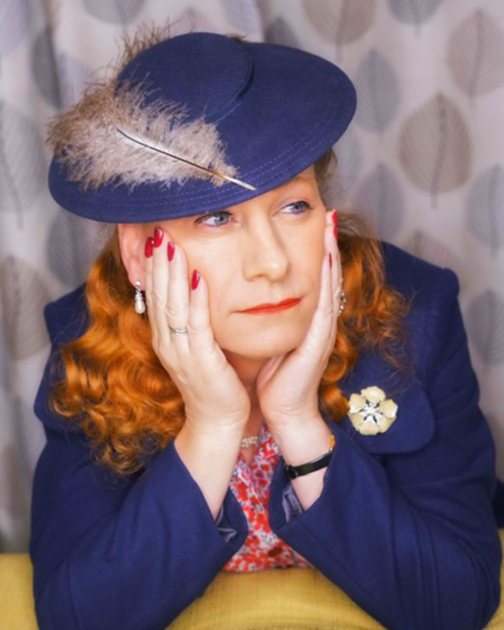 When UK-based Melody Appleby started her transition she first struggled with clothes.

“I knew I should be a woman but had no idea what I should look like. I never really took to high street fashion, none of it really seemed to work for me. Then in 2017 by chance I went to a music and vintage festival called Twinwood and my life would never be the same again: I was confronted with so many fabulous outfits mostly from the 40s and 50s, my first thought was everyone looked amazing, my second was how do I get to look like that? I’d never seen any of these styles in the shops I was going to.”

Appleby experimented first with 50s style but over time she has gravitated more towards 40s styling.

“I’m not really sure why – perhaps the tailoring just suits me better.” 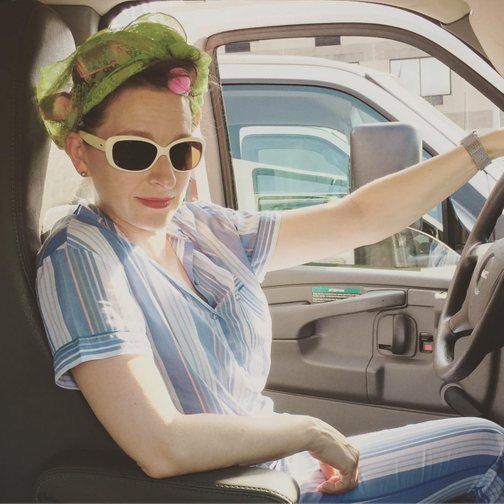 Not only the aesthetics of the decade matter – sometimes you can get inspired by the zeitgeist and societal movements that, in turn, affect the way people dress. Kellian Pletcher explains:

“The 40s was the era when women started to win real legal equity and parity in the US: women in the military, women working machines in factories, all-woman baseball teams, all-woman swing bands, women reporters, women codebreakers, women leaders! (Eleanor Roosevelt! Who was Hoover’s wife? Exactly.) They really paved the way for women to be equal and self-sufficient in a way that no generation ever had before.

It was a necessity because of the war and so I feel like the style and the era and the media was shaped to ask this generation of women to be competent: be smart, speak clearly, roll up your sleeves, know how to tell a joke, go to college. The 50s tried to roll back a lot of the gains that we made in the 40s but it was hard to get that genie back in the bottle.” 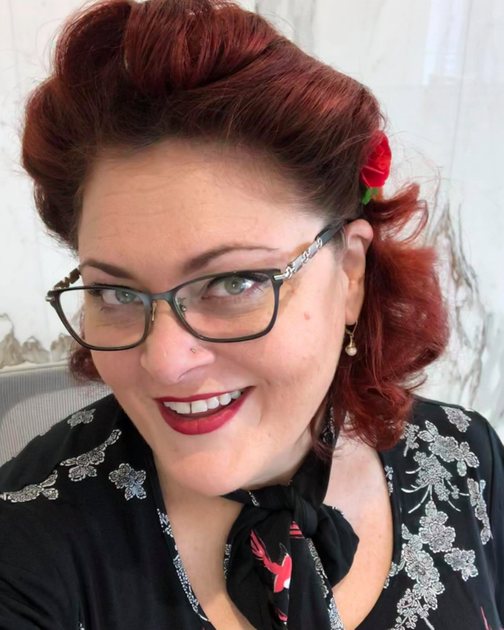 Stefanie Kressaty felt an affinity for the war years when growing up.

“The era, to me, felt natural and innocent. It was the time immediately preceding the “fast forward” era of technological advances that started in the 50s. Life moved slower, important things felt local and not so global. To that end, I probably romanticized the time in my teens when I did the most research and found my curiosity piqued.”

In addition to the music, modesty of the 40s fashion speaks to many women, Kressaty included.

“When watching 40s movies and newsreels, the fashions the women and girls wore were impeccably feminine and attractive without being too revealing. There was still a sense of decorum about them. As a young woman who always felt gigantic next to her friends, that aesthetic was very welcoming – I stand 5’11” tall, wear a US size 20-22 dress and US size 12 shoe. That’s what I have always aspired to: Feminine. Classic. Wholesome. A little mysterious. Sometimes a bit exotic. All without needing to bare half of my breasts or wear a skirt that didn’t stay under me when I sat down.” 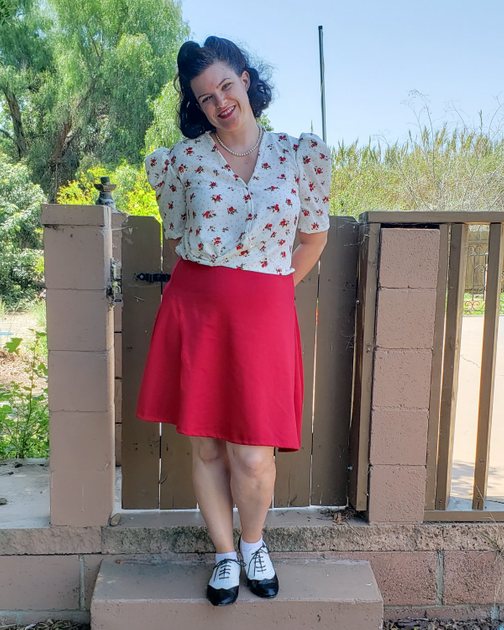 The 40s make-do-and-mend attitude inspires 40s vintage fans. From June 1941 until 1949, buying new clothes was rationed in Britain. Part of the Government's campaign was to urge people to repair, reuse and reimagine their existing clothes during the Second World War.

“I love the motto of “make do and mend”. As a sewist and mother of 3 under 9, they go through a lot of clothes and being able to patch and make their clothes saves me money”, says Rebecca Stowers.

“I try to follow a thrifty, war-time conservation ethic. Repair, repurpose, re-life. Fix it, use it for something else or give it a new life with someone else”, Kressaty says.

Music, modesty, and make-do-and-mend attitude – those seem to be the three things that make 40s fashion so appealing to modern women.