“I started learning to sew in 2017. 2016-2018 were extremely difficult years for me, the beginning of when I started dealing with my mental illness. I had lost everything, school, work and where I lived because of my mental breakdown. I am still dealing with the aftermath but I am slowly adjusting to my new normal. I started collecting Barbies as a hobby and something soothing I could do as an activity. I thought having dolls to dress and display around would be nice for me to look at in my room. When I started collecting I noticed how poor in quality the Barbie clothes made by Mattel are compared to the Barbie clothing in the 1990s and y2K era when I was child and playing with Barbies. I joined the Barbie community on social media and noticed a lot of adult collectors sew clothing for Barbies. I sort of knew how to sew by hand – my Mom and Grandmother taught me how to thread a needle and do some simple stitches. I also watched Youtube for some help. The past holiday season I also started making ornaments out of unfinished and failed Barbie clothing I have made in the past. I started with a pair of jeans that looked bad on Barbie but cute on their own and I sold them in a few hours after sharing on Instagram and people really liked them, so I just made as many as I could to make some extra money.

Most of my ornaments are inspired by mid-century 1950s-1970s fashion. Sometimes I’m inspired by songs. I will hear a song and see an outfit and imagine a character. That's how I get inspired for my own outfits at times. 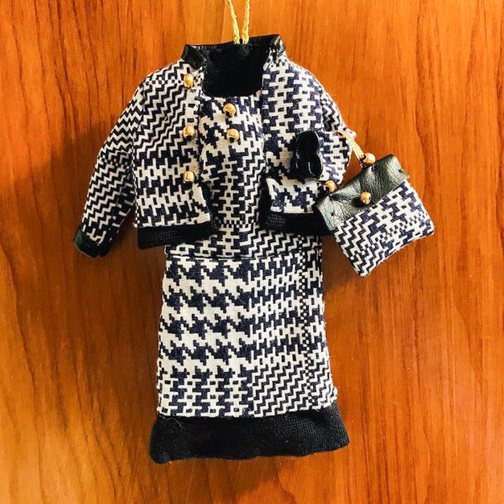 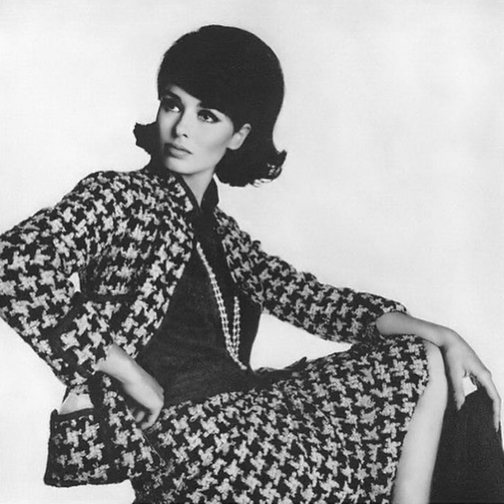 After the ornament is made I imagine who would have worn it and when in particular and make up a silly little story. Some outfits remind me of my friends so I name it after them.

Sometimes people gift me scraps or I cut up old fast fashion clothing I don’t wear anymore. Recently, I got some from Get Shredded vintage shop here in Baltimore. I like to challenge myself and see how I can use the whole piece of fabric all up. The smallest scraps I use for stuffing in my felt items I make. 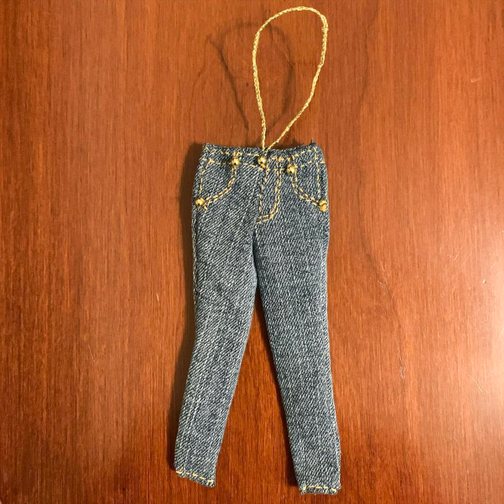 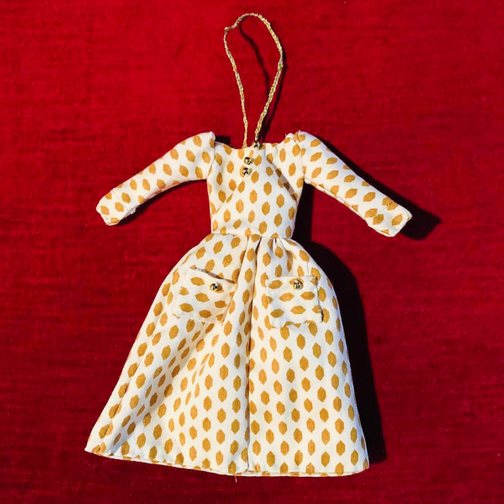 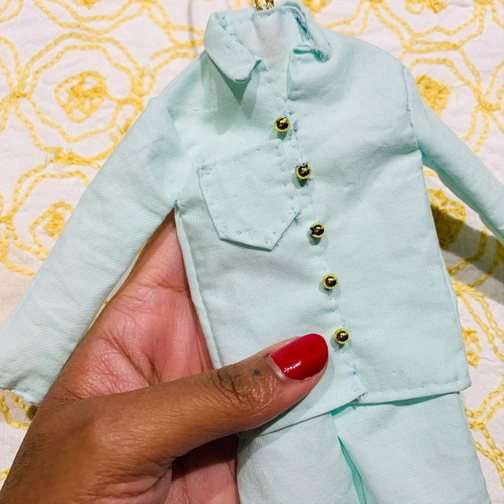 I wanted to make some cute little jeans to send to my friend José in Portugal who has become a close friend from afar because of quarantine. He recorded himself opening the envelope and it was the best thing ever to see his surprise of tiny jeans I sewed for him. He really loves denim and 1980s fashion and I thought it would be a cute surprise.

The dress was made for my friend Kelly who requested a mid-century dress with a full skirt and let me figure out everything else. This was made with old sheets I cut up.

Everyone loves tiny things! I don’t know why. Tiny clothes make people smile. Sending items I sewed by hand to my friends I haven’t had the chance to meet in person yet feels like sending a hug. 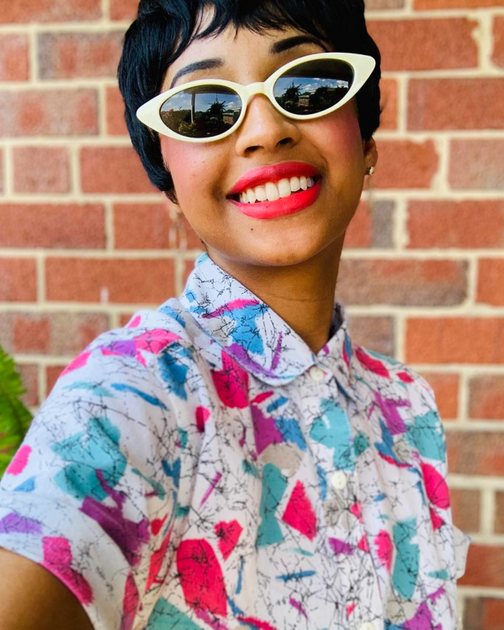 I had a eureka moment about a year and a half ago that I didn’t have to wear modern clothing – I could have Halloween every day and dress for different eras of the past. I believe that being alive is a good occasion to wear whatever you want, especially after the mental stuff I’ve been through. If I can get myself to leave the house that means it's good occasion for a great outfit.

I have always been interested in history and obsessed with dates and years. Even before I started to wear vintage I was pretty good at dating clothing and recognizing styles, especially of the 20th century. 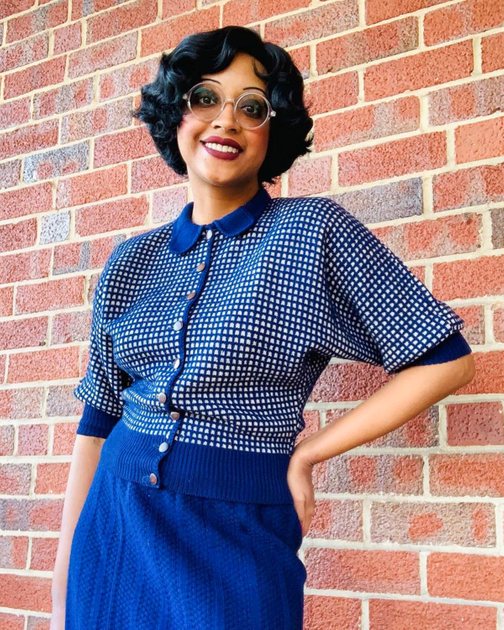 I do a look for about 1957-1963 very often and I think it suits me the best, it feels very me. But I also like to do a later 1960s look, think 1967- into the early 1970s. I like to go all in and be a bit strict with my vintage dressing. I think of it as portraying characters and I want to look like I stepped off a film set or a time machine. But, when I do these more strict looks I still often mix in modern pieces but everything needs to pass for the era I am wearing. 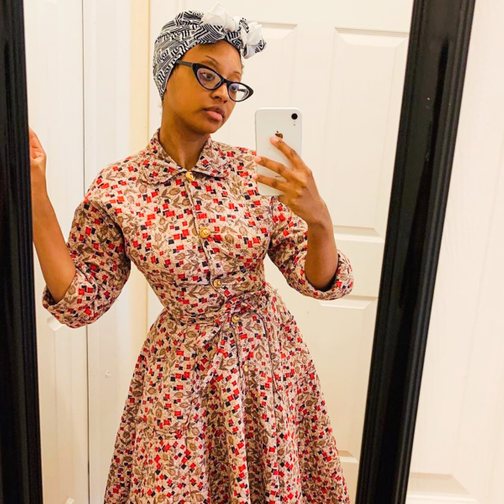 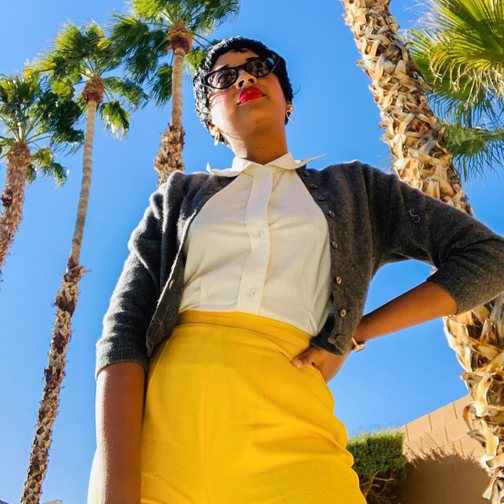 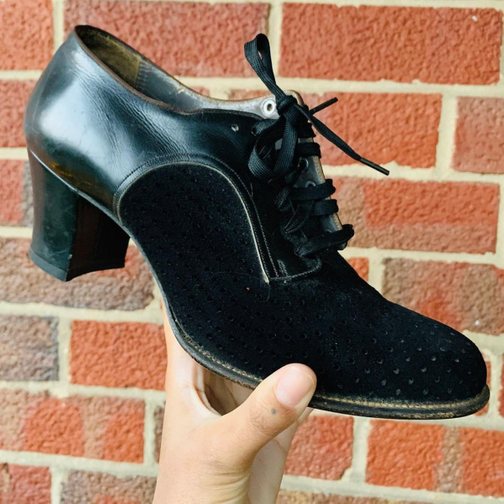 I like quality, flattering everyday basics that can mix and match with a lot of other pieces and be worn in many seasons. 50s housecoats are great examples of this: they are great to put on when I don’t feel like getting dressed but I don’t want to be hanging around in my pajamas all day.

My favorite 50s grey cardigan and 40s oxfords from my friend Nick are also great vintage basics. I met Nick online a few years ago in a fashion group on Facebook. He had the shoes hanging around and realized they may fit me. I nearly screamed when he sent them to me and I saw them. They fit me perfectly.

I got the cardigan on eBay. It is so flattering and soft. I put it on and knew I would be wearing it just about every day. It's the most perfect thing and reminds me of something the 1959 Barbie may have worn. 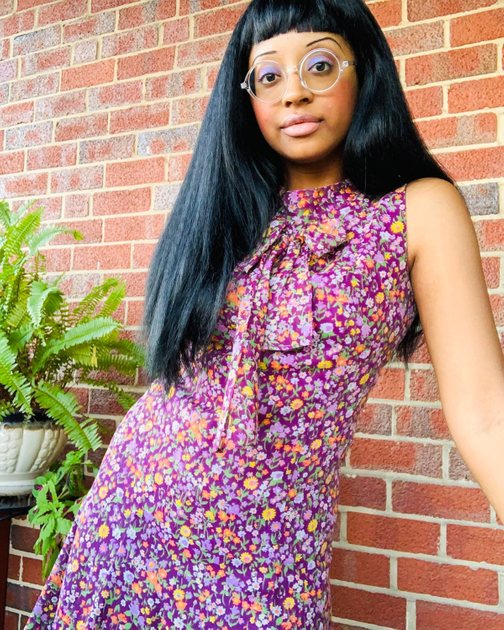 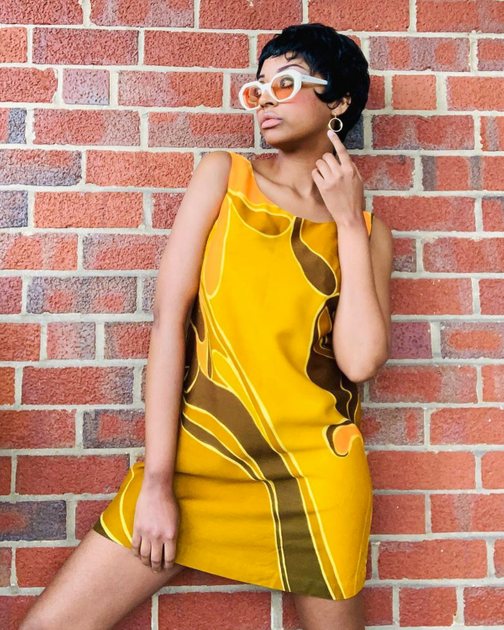 I like to do the cleaning, researching, and finding of items for myself. That’s half the fun of wearing vintage for me. I like history and I like repairing and mending. I’m also very lucky that many online friends I have made in the vintage community have sent me items as gifts.”