James Applegath is a pioneering figure in the vintage t-shirt business. The founder of the Defunkd t-shirt platform shares what he has learned about the business over the years.
Liisa Jokinen · Aug 17, 2021
t-shirts

James Applegath is a pioneering figure in the vintage t-shirt business. The founder of the Defunkd t-shirt platform shares what he has learned about the business over the years.
Liisa Jokinen · Aug 17, 2021

“From 1999-2004 I was part owner of a small nightclub called NASA here in Toronto, Canada. It was a nostalgia-based concept, featured a retro space-age theme – we had actual Atari 2600 and Colecovision and a ton of other retro gaming consoles that people could play. The whole place was covered in the 1970s and 1980s toys, posters, comics. It had a fantastic run, but five years in, it was no longer a hotspot so we decided to sell. I had been selling on eBay since 1999 and dabbled in it throughout my time at the club. I kept an eye on trends on eBay and noticed that vintage t-shirts were booming. A small part of this was probably because of That 70’s Show. Ringer t-shirts were even super hot at the time. There were a handful of sellers who I kept an eye on and then decided to jump into a new nostalgia project.

When I launched my vintage business in the summer of 2004, we were selling all types of vintage clothing from the 70s and 80s. But I saw more potential in focusing on tees.

Early on I saw that tees were going in the direction of being a collectible and decided to treat them as such.

They were also our best seller. I was dealing with limited storage space and loved that I could package tees in a letter-sized mailer. And it became fun to start curating different genres. We were among the first to do that with Hip Hop and Heavy Metal tees. The nostalgia drew me to it, it was a lot more fun to sell a vintage rock t-shirt than an Adidas jacket. I had actually already sold t-shirts at raves in the early 1990s, so it seemed like second nature.

With vintage t-shirts, I was self-taught, by being in the trenches at thrift stores, rag houses, and picking online. I do have a relatively good knowledge of most men’s vintage clothing from before the 70s and for that, I can thank my dear friend Olivier Normand. He is a pioneer in the vintage business, having had a retail store in the 1970s. He was among the first people to pick at clothing rag houses in Toronto. In 2004 he had his clothing warehouse directly across the street from where I lived. I helped him get on eBay and got a crash course in vintage clothing over the next many years. It was amazing, I could just go over there and spend a few hours digging through his racks, opening boxes. He still supplies period pieces to the film industry here in Toronto. It’s the best collection in the city, hands down. He has turn-of-the-century items, museum-level pieces, relics that he rarely even shows anyone. 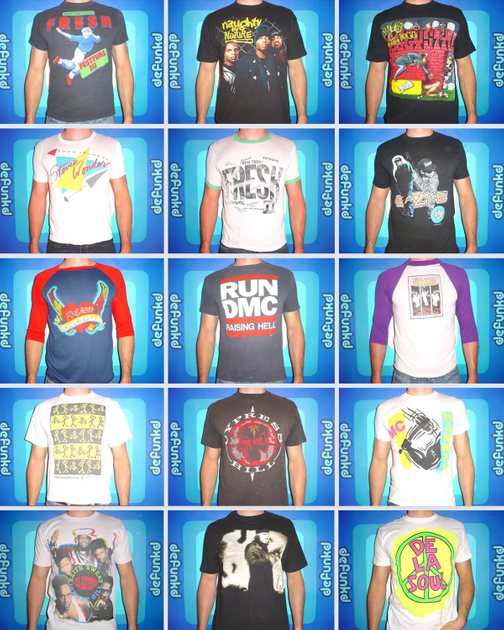 Since the early 2000s, the vintage business has changed in many ways. Firstly, obviously the timeline for what’s sought after keeps shifting. When I started it was the 1970s and 80s, and slowly became the 90s. Now it’s going into the early 2000s, which is still hard to accept, ha. eBay is no longer THE place to sell. Social networking is huge. Defunkd was on MySpace so it’s amazing to see how that’s evolved. There’s a more show-off vibe these days, that didn’t exist back in the day, but that’s the nature of social.

Vintage is fully mainstream now, which it wasn’t until the last five years.

There’s corporate interest, big money involved, there’s even a vintage clothing tv show coming. I’m loving these in-person vintage t-shirt markets/events, it was something myself and a lot of my colleagues from the early days considered combining forces on, but it was still too niche, and it’s awesome to see these events taking place.

In 2011, I launched a marketplace for authentic vintage t-shirts only. It went ok but obviously not as well as I had hoped. It was ahead of its time, it was mostly a one-man operation (with some help from my wife and a developer working on the site). Users and sales trended upward for the first two years but it quickly plateaued and then slowly declined. There was a base of sellers who were doing really well on it near the end. But it became increasingly tough to get new sellers to commit – Etsy had become a destination for vintage tees. There were a few other up-and-coming big-money marketplaces emerging. And there was also a trend of selling through IG. We tried to do it entirely grassroots, had no promotional budget. So even though the marketplace was free, our conversion rates couldn’t compare to eBay and Etsy’s. We also took a hit to our organic traffic after a few Google algorithm updates and that was a tough blow because we didn’t have any budget to pay for traffic. And eventually, the platform needed to be updated for the modern era (when it launched in 2011 mobile wasn’t the dominant device.) Updates to PayPal’s payments were coming fast and furious, every time they did it cost us money to get up to speed.

Oh, and while all of this is going on, my two sons were born and I was a stay-at-home dad. Once the second guy came along I decided it was time to close up shop. A few other vintage projects I was working on ended as well, we even attempted to put together a vintage clothing search engine. It was a bit heartbreaking to pack it all in, but I was burned out and that decision is something I will never regret because I spent so much time with my kids.

Right now, vintage is a hobby for me, although we have some plans in the works. Some guys work on their cars, I’m working on my website. I do have a stash of t-shirts and a quasi-regular supply, just not certain I want to start listing again, just yet. I’ve listed over 10k shirts in my life and that’s always been my least favorite part. I love pretty much every other part, but the listing process is so mind-numbing and can even be physically taxing (where my back pain sufferers at?) For many years I also used to model all the t-shirts too. I do have a t-shirt for sale right now as an NFT though!

When we relaunched this year there’s been a ton of work involved in upgrading all the old content and preserving all of the 15k tees that were listed in our marketplace during its existence. I’m working toward improving Defunkd and making it the ultimate resource for vintage t-shirts. The products that were listed on our site are an amazing little time capsule and big thanks to the community that participated in it.

Right now, the late 90s and the early 00s are the hotspots. All-over prints, which were once nearly unsellable are now huge. Movie and Comic Book tees. One of the surprising niches is country music tees. Religious shirts even have their own market. So many niches are doing well, which is amazing.

One of the big advantages of the 1990s and early 00s tees is the sizing. 1970s and 80s tees were so small by today’s standards that people who wanted to wear vintage, couldn’t, because nothing fit them. An 80s XL is barely a 90s M. So people were sized out of the market. This new age is benefitting massively from that - there’s more inventory in general and something to fit everyone who wants to wear it. I think the vintage business will only grow and they’ll be lots more corporate interest, we’ve already seen some big acquisitions. Chain retailers are getting involved, with curated vintage in their shops, which is great. But I suspect corporate retailers may eventually go after inventory sources more aggressively. This could mean they try to acquire vintage clothing mills or second-hand clothing chains, businesses where the used clothing infrastructure is already in place. Small businesses may start getting shafted, pickers will operate internally on behalf of the company.

It always has been but that landscape is about to change dramatically. I have a friend who has owned a clothing mill for decades and he’s already dealing with the struggle for inventory.

The biggest misconception about vintage business is that it’s glamorous. There are a few vintage influencers out there who make it seem like it’s easy and big money. Due to the limited nature of inventory, it will always be a hustle. There’s a ton of hard work going on behind the scenes that you don’t see. 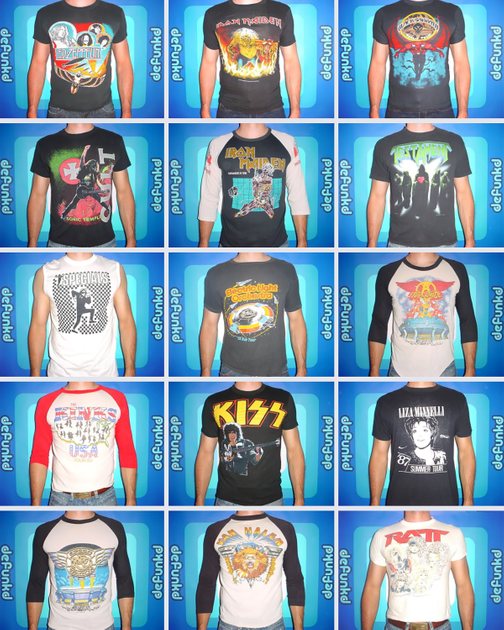 What should more people know about vintage and vintage business? Look into and respect its history. A lot of the new sellers have assumed it all started when they did. The online era of vintage tees has been around since the early aughts well before Defunkd was even a glimmer in my eye. But when I started, I did my best to figure out how it all evolved. There are sellers who have been around for a dog’s age, like Wax & Threads. You can learn a lot about what’s happening now by looking at trends of the past. For example, that $6k genie shirt is not worth $6k. Just like the $10k Led Zeppelin tee that made news in 2012 was not worth $10k.

Remember that one of the biggest factors in this is nostalgia and it has a relatively short window.

90s kids will soon grow out of their fascination with 90s Disney movies, and that bubble will burst. Just like how in my heydays 80s tees were massive, and then the bubble burst when it was no longer in the nostalgic sweet spot. Be prepared to pivot, quickly.”