A Queer Artist Who Discovered Vintage Through Buddhism

A Queer Artist Who Discovered Vintage Through Buddhism

Grey... (yes, Grey with three dots!) is a lead singer of an all-queer punk band called Home Alone releasing their first body of work in 2020. Grey... is also known as a curator, vigilante, actor, and model. Here they share their best vintage finds and stories behind them.

“I always felt like I was from a different generation. I was brought up by black members of Generation X who had adapted the mentality of consumerism being all-consuming.

I was born in the 90's – the peak of brand names, pop culture, and the internet age. I remember a lot of my childhood filled with lots of stuff. For some reason we never had enough stuff.

It was suffocating and I couldn't understand why we needed so much. I began practicing Buddhism at a very young age. I wasn't raised religious but I was looking for meaning and purpose, a greater understanding of the universe I guess. One of the first things I learned was how to let go of possessions.

Through meditation and other spiritual practices, I became a minimalist. Through minimalism, I became a very conscious consumer in every respect. But I'm also a queer artist so I couldn't strip myself fully of identity like a monk! My clothing was my most radical form of self-expression since I wasn't really allowed to express my personal views very much without a negative response from my environment at the time. I just wanted to dress with pieces of the characters and people who have inspired me the most and kept me alive. I couldn't really find that in fast fashion and I'd become very aware of how awful the fast fashion industry is for people and the planet so I've tried my best to support it as little as possible. I was looking to assemble armor anyways, pieces of me from all different times and places in the world, so that took a bit of time traveling and what better way to travel than in a thrift shop? 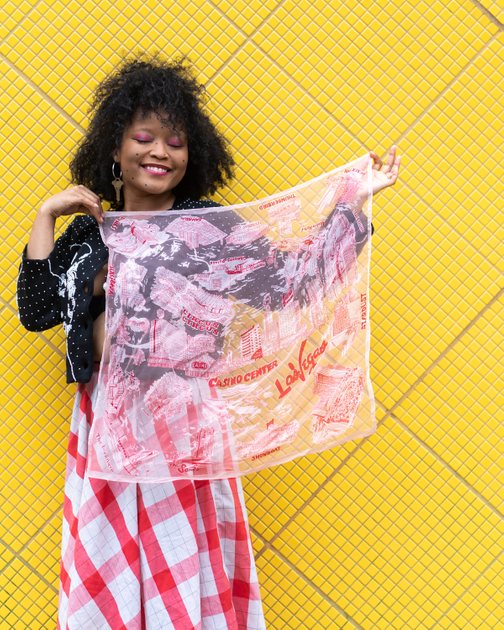 I just recently ordered this 70's Las Vegas scarf from Etsy. I love that old classic Las Vegas history, the glamour and the grit I resonate with heavily. Sometimes I can't tell if I'm the showgirl, the mobster at the poker table, or the coat checker.

I'm very careful with what I thrift because I don't want any negative energy attached to my garments. My first tip regarding thrifting is to cleanse yourself before and after. I find it's very important to be grounded when dealing with items that have been in others’ possession. 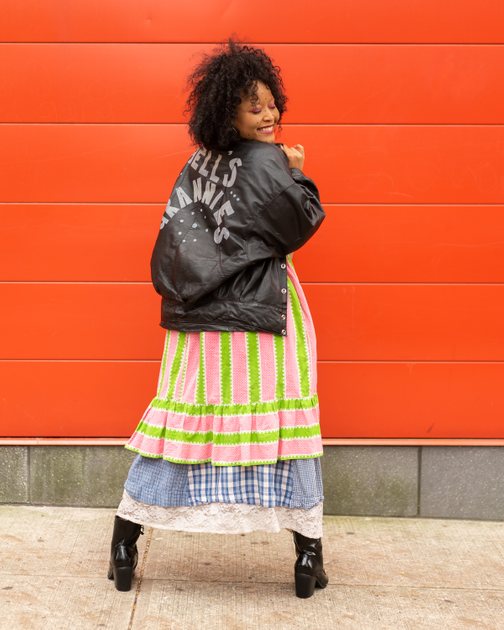 This 70's Monty Python Hell's Grannies leather jacket is from a random box sale while I was a club kid back in LA. I saw it and spent my last $20 on this jacket only to find out that this jacket may in fact be an original prop from the Monty Python Sketch Show. I was even told it's worth thousands of dollars but I don't care. For me, it's just a cute jacket with a perfect description of my personality. This is the first mini skirt I've ever owned. The owner of Berriez, Emma, has been a huge influence in me tapping more into my feminine energy and being truly shameless with my vessel. When I wore it for the first time I had never had such a reaction to my physical being, it's one of my favorite pieces because it gave me a piece of myself I thought didn't exist.

I had never seen Playboy boots before in my life and I'm not sure how I feel about Playboy yet as an entity but I couldn't pass up the chance to own such a collector’s item. The boots are from The Break store in Brooklyn, NY. I don't shop very often. When I do, I have a budget and try to have as much fun as possible. It's not about how many things you find, it's about the experience itself. I always love to scan, I'm not a huge fan of getting into the racks, I can usually tell if there is something I connect with or that intrigues me by the slightest piece of it being in my line of sight.

I suggest you focus on the outing itself and not just the shopping – go to a part of the town you've never been to before, eat a food you've never tried, hang out with someone you haven't before. I love this 80's upcycled Michael Jackson vest because it was the first vintage item I ever bought and I was so excited about it. I never wear it anymore but I love it dearly. I'm such a Michael Jackson fan. I bought the vest at Melrose Trading Post in Los Angeles.

My friend Jacob Elliot called me stoned and said he would send me this 60s coverall from California. He sent it and it was all jazzed up with a poem on the back and an E.T. patch (my twin) and soaked in lavender oil. I've worn it to almost every audition I've had since and had such strange luck with it on. I will never get rid of it, it's magical.”