A Brief History of Handbags in the 20th Century

The styles of women’s handbags have always reflected the values and lifestyles of the times. Edie, the owner of Edith Machinist, a vintage boutique in New York City, explains how.
Liisa Jokinen · Jun 3, 2019Text: Edith Machinist
fashion history

A Brief History of Handbags in the 20th Century

The styles of women’s handbags have always reflected the values and lifestyles of the times. Edie, the owner of Edith Machinist, a vintage boutique in New York City, explains how.
Liisa Jokinen · Jun 3, 2019Text: Edith Machinist

Here is a brief history of handbags from the 1930s to the 1980s. All the bags seen in the photos are from Edith Machinist, a vintage boutique in New York City. 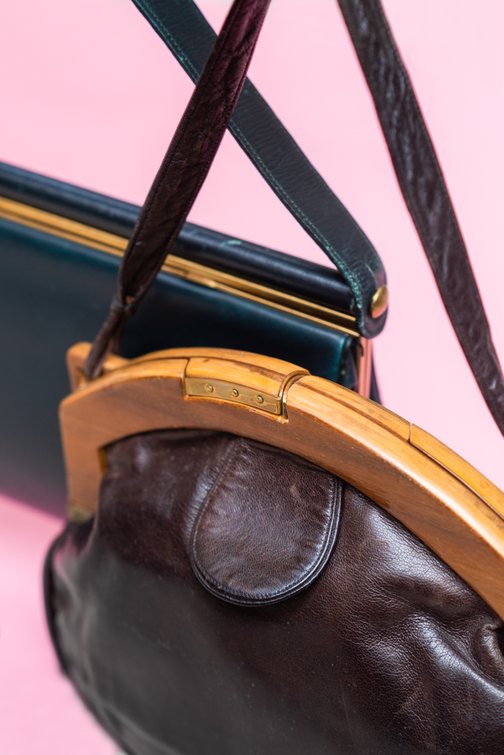 The influence of Art Deco in 1930’s handbag design cannot be overstated. It infused the geometric and streamlined shapes of bags, and their architectural frames and clasp metal hardware. The aesthetic tension between the strong modernity of Art Deco and the softer, feminine influences of the Arts and Crafts movement, are fully evident within the 1930’s silhouette, with the example of a repoussé floral leather bag having an industrial frame and clasp.

Other notable influences were the Surrealist and Dadaist movements, whose most famous fashion counterpart, Elsa Schiaparelli, designed absurd and surreal art object bags that were so futuristic and advanced as to look completely outside the realm of the early twentieth-century design.

Some of the decadence of 1930’s bag design is temporarily subdued during the Great Depression years, which led women to adopt a thrifty and frugal approach with their daytime bags. Even during those tough years, women did not sacrifice the embellished look of evening bags, and, instead, improvised with cheaper substitute embellishments like sequins instead of the glass beads that had been used in better years. 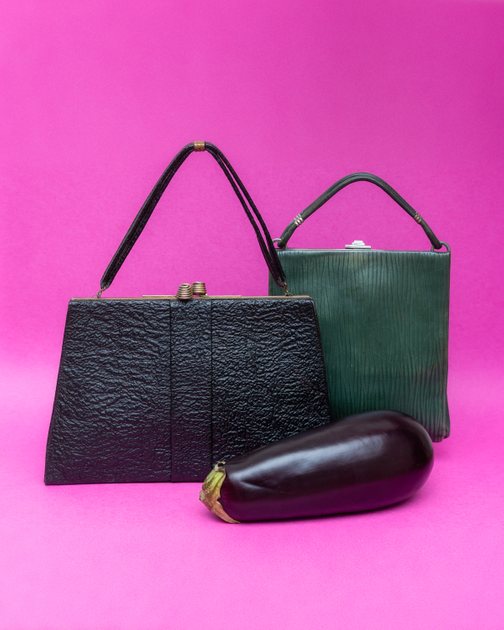 The general sizes of 1930’s handbags appear small to us, but in fact, they were an upgrade from bags of the previous decades.

Women were carrying more personal effects than before, and the interiors of ‘30s bags revealed a tight arrangement of mini compartments customized to hold cigarettes, lipstick, and coins.

Another important trend is the simple or flat envelope-style clutches, carried against the body, and sometimes referred to as pochettes that had appeared in the 1920s, but were popularized and mass-produced in the 1930s. These clutches sometimes had finger loops, and later in the decade, the rise of the wrist strap, and a fuller, more three-dimensional clutch body, paved the way towards the utilitarian silhouettes we see in the 1940s.

One notable and atypical ‘30s handbag design was created by the storied house, Louis Vuitton at the request of a wealthy winemaker client to easily transport precisely five bottles of wine. The resulting creation in 1932, the Louis Vuitton Noe, was a soft drawstring bucket bag with rigid bottom - an innovative update to the drawstring fabric pouch that had existed for centuries - and has become one of the foundational and enduring handbag silhouettes of the 20th and 21st centuries. 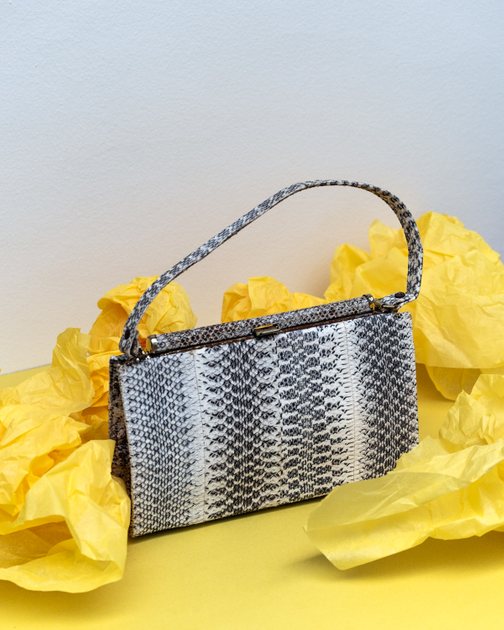 We can see the industrial and Art Deco design elements continue into the early 1940’s bags, in their structured bodies and architectural frames, clasps, and closures. The 1940’s bags had a limited color range of navy, brown and black with minimal features, and this design spareness reflected the austerity of the times with the Second World War taking center stage.

The scarcity of materials during wartime such as leather and certain metals led to a do-it-yourself approach, and women improvised their own bags from scraps of fabric as well as knitted and crocheted bags.

Interestingly, we start seeing many 1940’s daytime bags with larger bodies, including bags that mimicked men’s military satchels and rucksacks, and notably, the introduction of longer straps. In fact, we don’t see the rise of the shoulder-style bag until the war years, and certainly, there hadn’t been any mass use of longer straps on bags in prior decades. With many women entering the workforce as a necessity with men at war, they needed practicality with their bags, and the introduction of the longer strap that could be slung over the shoulder combined with other utilitarian elements, were a function of this need.

Far fewer of these 1940’s daytime bags have physically survived, since women used them until they were quite worn or threadbare, and so they are not as commonly associated with the decade in peoples’ minds. Instead, the bags that have mostly survived, and the ones you typically find in vintage boutiques like mine, are the evening bags, and these bare little resemblance - with their ornate details like bakelite handles, jeweled frames and petite satin or rayon bodies - to their 1940’s daytime counterparts. As the economy started to recover post-WWII and women returned to a lifestyle of domesticity, and were expected to maintain the image of the perfect housewife, the bags, in some ways, reverted to the quaint styles of past years.

For one thing, the strap length shrunk considerably, and women wore their bags just below the elbow, in what we now refer to as a “lady”-style bag.

Unlike the minimal designs of the 1940’s, the mark of luxury, novelty, and sometimes, frivolity stamped 1950’s bags.

Women carried and owned a wide variety of bags from casual sporty to glamorous and prim and proper. These bags often used the finest calf leathers or exotic skins like ostrich, alligator, and antelope, and explored a new vivid and esoteric color palette, including pastels like lemony yellow, lavender, and mint green.

Of course, there were still many variants of the classic black bag in the 1950s, but in keeping with the new trend of luxeness, they were leather-lined in a contrasting pop of color, most often lipstick red, a signature of the Koret bag company. Lucite and other forms of plastic materials that had been used in the war effort, could now be diverted to luxury items, and so, a whole collection of plastic handbags was launched that extended beyond a simple box shape to include all sorts of futuristic silhouettes.

Along with kitschy plastic bags, the trend towards exaggerated hardware that appeared on ‘50s bags, such as an oversized safety pin serving as a bag handle, metal bow accents, curving kiss closure frames, and novelty bags shaped as animals and souvenirs, was evidence of a resurgence of the surrealist trend of the 1930’s.

The 1950’s also introduced the notion of fashion luxury houses creating “it” bags.

Most famously, Coco Chanel, who came out of retirement to design the quilted and padded black leather Chanel 2.55, named for the month and year - February 1955 - in which she designed it, was an instant classic among society ladies and celebrities. When Grace Kelly was featured on a 1956 Life magazine cover wearing an Hermès bag to obscure her pregnant belly, Hermès heralded it as the “Kelly” and the notion of a status bag was cemented. 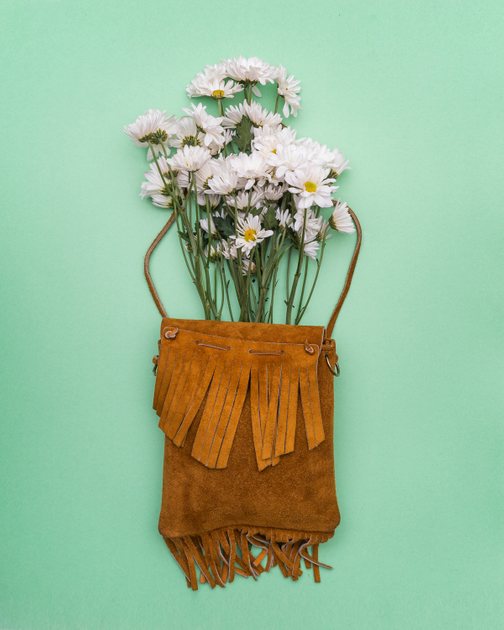 At the beginning of this decade, the bags were still very classical and refined, with a silhouette that fell somewhere between soft and structured, and often had a central geometric hardware piece or closure.

One 1960’s silhouette that embodies this soft-hard dichotomy is the hobo bag, a semi-structured bag with rounded corners and a shorter shoulder strap, made famous by Gucci.

The 1950’s saw the rise of the status bag associated with a prominent figure and fashion house, and this trend continued in the 1960’s with figures like Jacqueline Kennedy (one of the decade’s sartorial icons), who was often seen in public wearing her Gucci hobo shoulder bag, and which was later renamed in her honor as the “Jackie” bag.

Pop art movements infused both the graphic and psychedelic prints as well as the “space age” and futuristic hardware, we often see on 1960’s bags.

Similarly, the mod subculture of “Swinging London” that swept through Europe into America in the early to mid 1960’s, is epitomized by the metal chainmail bags that were designed to literally swing with movement on the dancefloor - famously created by high-end designers like Courrèges and Paco Rabanne, but which were also produced in abundance by lesser known design houses.

Lastly, as the tumultuous events of the latter part of the 1960’s unfolded - like the civil rights movement, anti-war protests, and the women’s movement - bags trended towards softer and free-form silhouettes with artisanal constructions. Think of the raw-cut, patchworked or fringed bags of the hippies, with their “anti-fashion” appeal, and their political and rebellious statement to those (often older generations) who were still carrying structured and framed bags. Interestingly, some of these 1960’s soft satchel styles were also influenced by those of the 1940’s war years.

By the early 1970’s, the hippy/artisanal trend of bags from the 60’s had gone mainstream, but now fashion houses interpreted these styles in more developed and refined ways using techniques like stud work, embroidery, and whipstitching to create a luxe bohemian look.

As women entered the workforce in greater numbers during this decade, and the image of the modern working woman permeated all aspects of fashion and culture, work-style bags also entered the mainstream. It wasn’t until the 1970’s that these “carry-all” work totes became mass. The bags often mimicked a briefcase or attaché case, with a combination of a shorter top handle and longer strap, a rectangular and spacious body, and sometimes an envelope-style flap.

In the latter part of the 1970’s, the glamour of nightlife prevailed with the opening of Studio 54 and other popular dance clubs, and a substantial category of evening bags came to the fore, commonly with metallic or sequin accents and/or a metal body, such as the gold-tone minaudieres or hardcased bags that typically had a jewelry-like chain strap.

Also, in the metal category, the fine metal mesh bag, a style that first emerged at the turn of the century, and appeared in iterations throughout the decades, now reemerged in full force in the 1970’s as a “disco” bag for its ability to glint under a disco ball. The artisanal and earthy patchworking style of the late-1960’s and early-1970’s, gave way to a more glamorous patchworking towards the end of the decade, using lizard skin and snakeskin on streamlined evening bags with gold-tone hardware and chain straps.

Women’s increasing sexual freedom in this decade was mirrored in the sinuous and body-hugging bags of this decade, with designers like Halston, creating sensual form handbags. 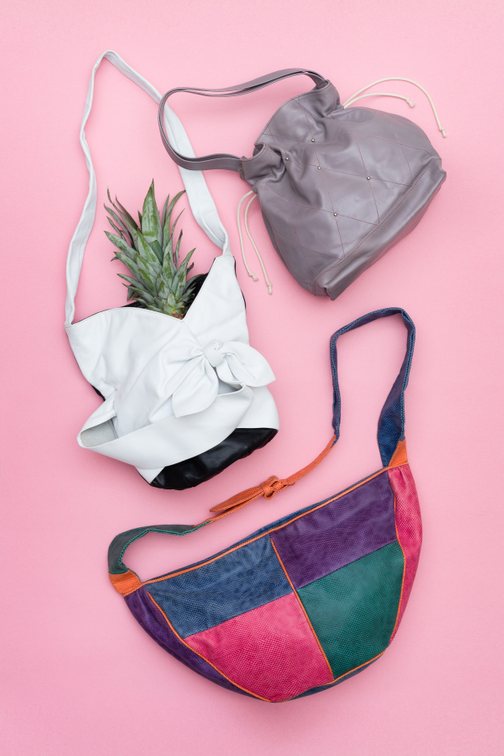 The use of exotic skin patchwork that appeared at the end of the 1970’s continued as a trend in the 1980’s with notable differences. The patchworking expanded to include a wider range of mixed materials, and the silhouettes went from sleek and slim to soft and oversized.

The iconic handbag designer, Carlos Falchi, describes the soft and pliable quality of ‘80s bags, “I want to be able to squash and trash a bag and still see it keep going.”

(This quote is included in “Handbags: The Power of the Purse” by Anna Johnson, which is a great guide for anyone wanting to learn more about handbag design.)

As the economy boomed in the 1980’s, conspicuous consumerism reigned and the trappings of excess meant there was nothing subtle about handbag design, and that echoed in the dramatic increase in volume and size, use of mixed media materials, and sometimes loud colors. Stripped of their embellishment and garish tendencies, most '80s bag silhouettes are actually quite simple and elegant, such as the soft bucket, the crescent hobo, and the flap messenger-style bag.

In the ‘50s and ‘60s, luxury houses explored the use of embossing their bags discreetly with the companies' gilded crest or emblem. During the ‘80s, the notion of status bags was maximized, with logo-printed patterns exploding across the body of bags or aggressively dangling as gold-tone logo hardware.

On the other spectrum of 1980’s handbag design, there is a return and fascination with deco-style design elements like geometric bodies and industrial-style metal frames, and reinterpreted with greater volume and different materials for an ‘80s appeal.

All the handbags in the photos from Edith Machinist.